As a self-identified “progressive” and “conscious” human being I fervently imagine and proclaim my desire for the economy and political system to become more enlightened.

My Facebook friends and I all bemoan the inexorable waves of injustice and trade righteously indignant angry faces at the newest evidence of “density” in the world. We exchange virtual high fives at clever memes and gifs designed to cleverly point out the idiocy of the oppressors.

But, you know what: f*ck that shit.

It’s not enlightened and it’s not spiritual and it’s making the problem worse.

If we want anything to change we gotta start by getting real. Really real. Like the kind of reality that is a-little-bit-too-hot-to-handle-and-could-you-please-just-ease-up-on-the-reality kind of real.

There. Truth. If we want enlightened economy and if we want conscious politics, here’s where we start.

I want to build a great big freakin’ wall to separate myself from the parts of my life that feel scary and overwhelming and whose presence makes me very uncomfortable. I know that from the inside. I get it. Ask me about my sexuality.

And, I know what it’s like to use my position and privilege and authority to play a game with people’s lives as if the only thing that mattered was me winning and feeling okay about myself at the end of the day. I have lived that. Ask my son.

And I know what it’s like to lie and spin and dodge and weave instead of saying I don’t know. Ask my ex-wife.

And that’s why Donald Trump is Donald Trump. Because I participate in the same unconsciousness that he embodies.

I worked for a peace and non-violence NGO in Oakland when Oscar Grant was murdered. I remember being moved and struck by the “I Am Oscar Grant” movement that was born from that tragedy. Millions of people, it seemed, moved to identify with the oppression and vulnerability of Mr. Grant and call for solidarity in the face of systemic injustice.

I have come to believe with all my heart that the problem isn’t what we think it is. It is not Liberals vs. Conservatives or the oppressed vs. the oppressors in any form. That paradigm is way too small to get us where we need to go.

This is where we need a practical spirituality. It’s no good if we go off on meditation retreats and ayahuasca journeys and to Burning Man and to the Himalayas if we come back and spread some bullsh*t social media message that belittles or demonizes Donald Trump.

Oneness is the experience that we are all implicated in the other reality we see outside of us. I am Donald Trump. I am Adolf Hitler. I am Dr. Martin Luther King. I am Aung San Suu Kyi.

You see, there are only two options. Either we are all guilty or all innocent. There is no world in which we get the moral high-ground when we are playing the game of “who is a worse human being?”

Just because we can point to someone who we think is doing life worse than we are doesn’t actually liberate us from the unconscious guilt we are trying to escape from.

When I was thirteen years old, trying to mask the pain I felt inside me, I called a slightly chubby girl, “a Christmas ham” out loud in front of the class. Everybody laughed, she turned red and started hating herself a little bit more. What happened to her? Did she starve herself to death later? How did she pass on my painful fear of not being good enough that I transmitted to her?

This is just the beginning of my confession. I’m guilty, friends. That’s the price of living in this world of striving to be enough and fighting those bad guys over there.

It turns out we are always convicted by the same laws we use to condemn our brothers and sisters. Nobody qualifies. I’m out, Trump’s out and you’re out. When we hate each other we hate ourselves because deep down we know that we too, in many secret ways, have been the perpetrators of pain. Each of us has hurt others in our lives when we act from our own fear and shame.

So what’s the answer? The answer is forgiveness. Forgiveness, in this way, is not an act of mercy in response to an apology; it is completely different way of seeing ourselves and the world.

Forgiveness is understanding that there is another way to live. It affirms the reality that there is a place in each of us that is always and essentially good enough and we can choose our path from that place.

Forgiveness is understanding that our violence is always a cry for help; the anguished scream of feeling unloved and unlovable. Forgiveness is dreaming a world in which we live the truth proclaimed by that ancient poet Kabir:

All are forgiven
And, moreover my dears,
No one has ever been guilty
(Kabir, translated by Daniel Ladinsky)

No one has ever been guilty. Now that’s a world worth dreaming about.

So what? Donald Trump is the president. And maybe you can, like me, feel powerless to know how to live in the face of all this fear.

Forgiveness gives us back our power. It is the practice that restores our agency and freedom. It gives us back our dignity and reminds us that we are the people who get to choose how we live. And when we act with freedom we actually sow seeds of it al around us.

Forgiveness reminds us that if we condemn Donald Trump that we, too, are condemned. But if we can see his anger and fear as the anguish of feeling unloved that it is then we can begin to dismantle the real problem and not make it worse.

Imagine Donald Trump felt forgiven. Imagine instead of making him different and wrong we owned how similar his fear is to our own. Imagine instead of ridicule and hatred we held him in our hearts and wished for his suffering to end. Imagine how good it would feel to claim your power back from the reactivity of disdain and contempt.

This is a grassroots movement. This starts within the walls of our own homes and our own hearts. And it begins with people much closer to us than Donald Trump.

Our parents. Our children. Our partners. Our neighbors. Our teachers. Our enemies.

This power of love will ripple. It will change our families and communities and our country. Because forgiven people make different choices.

Forgiven people do not go to war for there is nothing left to fight about.

And it starts by not allowing anyone to be condemned. Even those whose pain scares us. For if one is guilty, we all are guilty and the world goes to hell.

Let’s make this a movement. Let’s create the world we want to live in and allow Donald Trump to be the portal to forgiveness.

This isn’t new. This is the compassion of Buddha; this is the mercy of Christ; this is the Dream of Dr. King. It’s not new but it’s up to us to dream it again. 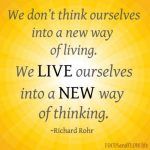 Love is Unconditional But Relationship is NotUncategorized 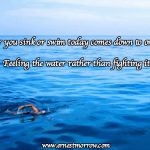 Whether you sink or swim comes down to one thing…Uncategorized